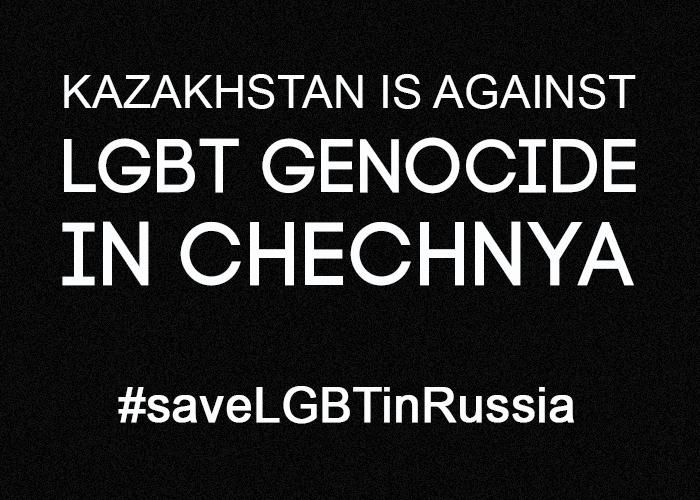 The LGBT community of Kazakhstan protests against torture and murder of LGBT people in Chechnya and in the whole world.

We see that there is aggressive propaganda of hatred towards LGBT people, which develops into domestic violence, and in some cases, into genocide organized by state bodies, which we observe in Chechnya.

We appeal to the authorities and society in Chechnya and all of Russia with the demand to stop the repression and the genocide of LGBT people. We urge the entire world community to condemn the LGBT genocide: from ordinary citizens, human rights defenders, law enforcement agencies up to heads of associations and the mass media. The human right to life is a fundamental human right.

Every year over 300 murders of trans * people are being revealed in the world. And how many murders / suicides do LGBT people remain unknown?
We often hear about the assassinations of LGBT activists from different countries and sorrowfully understand that the perpetrators will not be punished. Journalistic materials propagating hatred towards LGBT people are published daily. We are blamed with crimes that we did not commit, for example, pedophilia. Based on our sexual orientation or general identity, we are denied medical care, we are deprived of housing, the opportunity to learn and work. In the 21st century, there are still states whose legislation prescribes imprisoning people and putting them to death due to their sexual orientation and gender identity.

The situation in Chechnya is horrifying, but this forces us, LGBT people, to defend our right to life even more. We urge our supporters to join us and speak out against misanthropy, against the LGBT genocide in Chechnya.