On May 17, a video in support of Kazakh LGBT people appeared in social networks, which was recorded by diplomats from different countries. The video had spread through different channels and everywhere it was posted it caused heated arguments on whether lesbian, gay, bisexual, and transgender people can be considered humans.

Kazakhstani MMA fighter (mixed martial arts) and three-time world champion Kuat Khamitov also participated in the discussion by stating that ‘These people are worse than dogs!’ and adding that ‘Dogs can be offended [by this comparison].’ 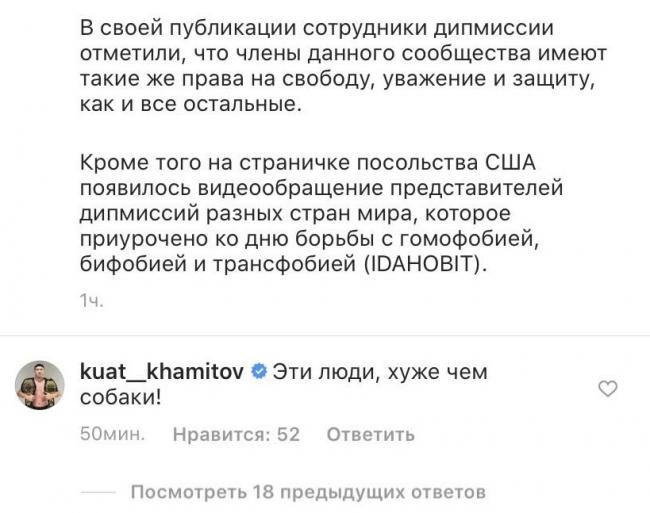 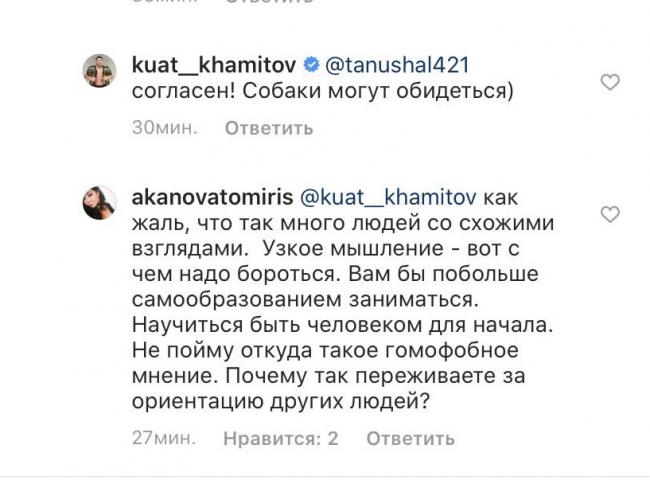 Moreover, MMM Kazakhstan Fighters supported its fighter by comparing LGBT people not only with dogs, but also with pigs. Given the fact that dogs and pigs are considered unclean animals in Islam, such a comparison is extremely offensive.

The fact that a well-known in Kazakhstan champion and a national sports organization take liberties to do homophobic attacks has outraged social network users.

LGBT activist Nurbibi Nurkadilova wrote an open letter to Kuat Khamitov, in which she reports that as an open LGBT person, she is offended by the statements of Kuat Khamitov, whom she considers the pride of the nation and the international representative of Kazakhstan. The activist states that she does not understand what Khamitov had in mind when he compared her and other LGBT people with dogs. She said that a well-known athlete, whose opinion millions are listening to, simply does not have the right to hate speech because this can lead to terrible consequences. In Kazakhstan, dozens of hate crimes are committed every year because of hatred based on sexual orientation and gender identity, and LGBT people live in constant fear.

The editorial board of Kok.team endorses Nurbibi’s statement and, in turn, writes an open letter to Alik Aidarbayev, the President of the National MMA Federation in Kazakhstan and the Chairperson of the Board of KazMunayGas.

We ask you to publicly condemn the homophobic statements by Kuat Khamitov and the MMA Kazakhstan Fighters Instagram account, as well as to undertake to change the organization’s culture and promote tolerance within the organization.

Your fighter, Kuat Khamitov, plans to participate in the UFC competitions, but can he do it, having a reputation of a homophobe? We are sure that you know about the UFC fight for its reputation in the LGBT world. In 2019, the organizers of the championship released “We Are All Fighters” T-shirts during the month of LGBT pride, and the proceeds were sent to support the international LGBT organization GLAAD.

Simultaneously with this open letter, we will send letters to IMMAF and UFC demanding that Kuat Khamitov not be allowed to participate in competitions until he and the National MMA Federation in Kazakhstan offer a public apology to LGBT people in Kazakhstan.