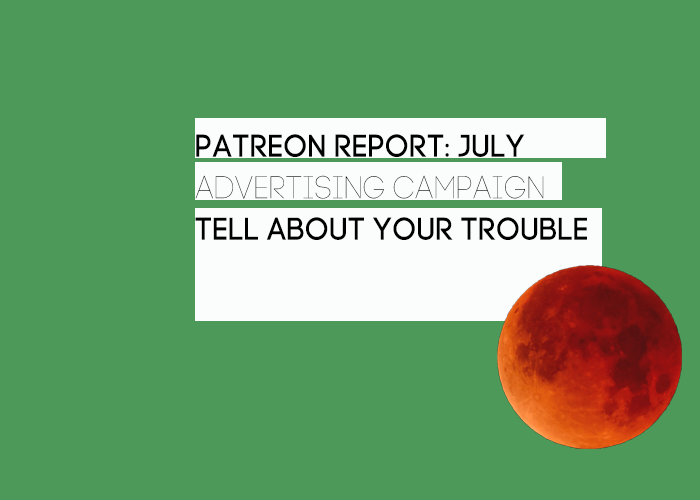 July is an amazing month. In Israel, more than 60,000 LGBT-people struck against the new law on surrogate motherhood, which deprives same-sex couples of the opportunity to use this service. We could have different points of view on surrogate motherhood, but it should be noted that such a large-scale political protest rally of LGBT citizens in the world has long been absent. In Cuba, in the draft of the new constitution, homosexual marriages may be fixed, and Lebanon took one more step towards abolishing the criminal prosecution of gays.

It is time for the second report to our partners - people who support the monthly advertising campaign Tell About Your Trouble donating money on Patreon.

Total for the July advertising campaign, we raised $ 130.98.

Total - 94, 777 people have seen the advertisement of the project Tell About Your Trouble.

Compared to the June campaign, coverage fell by 70,332. This decline looks unexpected, given that last month it was spent $ 56.48 more.

We explain this by the fact that in June, more than 95 percent of the shows were directed to the audience in Instagram (this platform is connected to Facebook), whereas in July all advertising was directed only to the audience on Facebook.

However, the smaller audience turned out to be better. This can be determined by several criteria.

1. Attendance of the article Tell About Your Trouble, which refers to the advertising profile during the June campaign increased from 999 views to approximately 2000. Then, according to the results of July, the number of page views increased from 2000 to 13 thousand.

2. Publications that have been blown about Instagram actually did not have feedback - this can be explained by the way the content is consumed in Instagram - quick swipe and minimal commenting. While the publication aimed at the male audience caused a lot of discussion and a sharp reaction of homophobes.

To date, 27 people have reported cases of discrimination and hate crimes related to sexual orientation and gender identity (SOGI) - 5 more than in June.

The project "Tell About Your Trouble" is a tool for monitoring cases of discrimination and hate crimes towards LGBT. Since there is no such legislative in Kazakhstan, there are no statistics, and therefore there are “no crimes”. This is what homophobes and officials say. But the community members’ experience suggest otherwise. Tell About Your Trouble allows people, with whom a disaster has occurred, and who will not go to the police because of fear, at least to report what happened to them. These statistics will become part of the alternative report on human rights in Kazakhstan in 2019, when our officials will report to UN.