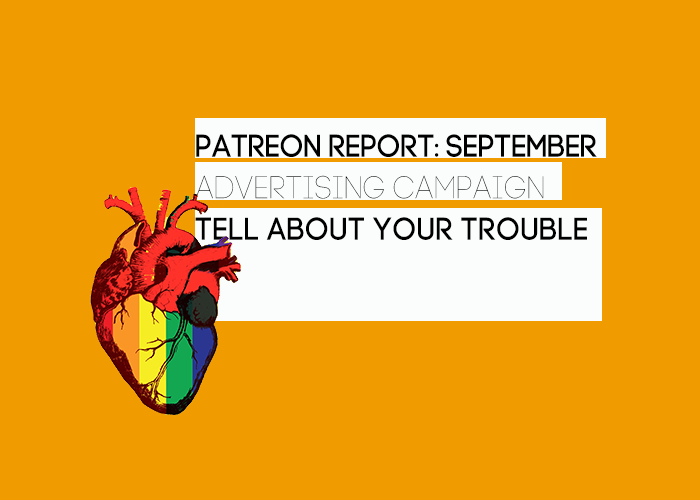 September is a sad month. Our comrade has gone - he committed suicide. There is no doubt, the homophobia permeating Kazakhstan’s society forces our people to kill themself. Dear Friend, we are going to keep fighting for all our brothers and sisters. Coincidentally, we published the results of the master’s thesis made in Nazarbayev University, which showed that more than half of gay men in our country were thinking about suicide and/our has attempted suicide.

In September, another important material was released, among others - that the officials underestimate the number of MSM by 3 times. Apparently, it is scary to admit that the minority is not such a small group as it is using to think.

We also published an article celebrate the Bisexuality Day!

And now let us inform you how the campaign of the project Tell About Your Trouble was run using funds raised on the Patreon.

For the first time, a campaign was launched on VKontakte. Two advertising campaigns were launched: LBT-women, and GBT-men. In total, 6091.43 rubles (approximately $ 93) were spent. On account Vkontakte has left 4 770 ₽ (about $ 76). This amount was transferred to October.

This is three times lower than the result of the campaign on Facebook. However, unlike Facebook campaigns, Vkontakte advertising tools allow you to customize the display of advertising to members of specific groups. The target groups were those dedicated to LGBT people. This is the direct target audience of the Tell About Your Trouble project, while on Facebook advertising was shown to all users who had fallen under demographic settings.

To date, 42 people have reported cases of discrimination and hate crimes related to sexual orientation and gender identity (SOGI) - 10 more than in August.

Tell About Your Trouble report